A charming gent clad in a shorts suit who I’d stopped to street-style snap, very jovially asked me if I was doing a report on the biggest dick-heads in Dalston.  I was rather surprised that such a package in its orange geo-print backed with bright white and sock-less-ness contained such humour. It was a pleasant surprise. Anything goes, style-wise in London, and that’s a big gulp of free fresh air, having travelled on the Eurostar from an odd existence in the land of stiff, silent, monochrome elegance.

However, I digress, there is indeed a lot of sock-less-ness in London.

This city is fast and it is furious. There’s not so much sympathy shown to people with dreams but there’s a lot of ‘hats-off’ to hard work and tangible results. There’s a cocktail of style here, and there’s real confidence, an assertive, competent ‘I’m going somewhere’ attitude, and all that confidence can wear whatever the hell it wants – and so it does, and is often (I realized having scoured the vintage stores in Angel) dressed in overpriced pieces of synthetic fibres from the seventies.

And there are a lot of tattoos. There are hats, drapes, clashing colours pulled in with classic tailoring, and there is another world too – a sea of well-cut navy suits and slim ties racing around the subterranean public transport hell. They, those people racing around in their well-cut navy suits, continue to wear the same slim-cuts on their time-off too. The first Sunday, I stood taking in a man no more than thirty, a neighbour, with whom I had paced the same path along the early morning trot to the tube, and to my dismay he was wearing the same shape and textures of the weekday garb in sunnier, slightly more plastic shades for the weekend. I imagined all the uniformed suits running around on their weekends off in the same uniform of brighter shades like an subconscious lego-man chorus in a Greek drama – the subconscious subterre theatre of London life for under thirty-fives working in big brutalist buildings dedicated to commerce.

There is an overriding casual sense to dress; The I-couldn’t-care-less with trainers under patterned trousers and big ugly clumpy shoes at the end of bare legs, which stomp their way with the confidence discussed above and the decorated assertiveness gained from those years of the early twenties spent working sixty-hour weeks.

Hipsters. There are a lot of hipsters in London. So much so that I no longer can believe that he or she, the hipster, was born in Brooklyn, and if he or she was, he or she has made Shoreditch his or her happy home. A place where there is an unsettling mix of social groups, whereby homelessness and extreme poverty can exist in parallel with the expensive cafés and bars packed to the brim with sock-less feet parked beneath the broken-down school desks rescued from the horror stories of classrooms from the fifties, and upon which the hipsters’ mac laptops rest.

I quite possibly should have taken out my own Mac laptop at any one of these points of nauseating observation and donned a German trilby sourced in Brick Lane to make myself feel better and join the orchestra of the tippity tap tap tippity tip tap tap soundscape. But reaching a low level of self-loathing brought on by feeling like a complete social failure who had never worked sixty-hour weeks, it was a miracle that I managed to continue my drinking the fruity black coffee against the sock-less backdrop.

If you ever find yourself in a position where you are drinking too much fruity black coffee, solo, against a backdrop of sock-less-ness and scrolling numbingly through various jobs pages to the point where your head feels far too heavy for your neck, then my advice is to step outside for a few minutes and offer any one of the many homeless people sitting outside these establishments a plastic mug of fruity black of choice.

On the first expedition, there was a lanky, poetic-looking chap with an Eastern European accent.

He smiled a dark beauty that reached his big sunken eyes.

One girl, standing, not sitting, and who had complimented me on my multi-coloured cross weaved bag, was less than twenty, but a previous heroin habit had helped mangle her face to look forty.  She was so incredibly clean that I couldn’t but rudely remark on it by referring, inquisitively, to the shine of her hair.

‘Primark. No excuse to be filthy when you can buy a pair of knickers and a pack of socks for under two quid. You can take a wash in a MacDonalds. There are showers in the shelters. I just don’t like sleeping in the mixed ones.’

Full of the kind of electricity that has its multi coloured wires dangerously exposed, our exchange was very brief and she headed, quickly, in a southern direction until I could make out neither she nor her velour Primark tracksuit bottoms anymore.

In those neighbourhoods, rammed with that wonderful organised madness that is ok to wear on your sleeve here in London, you quite often want to chase after someone who looks cool – and often they’re ok with this. They take it in their stride, pacing on before you’ve had a chance to tell them where on the great internet jungle their shot will live forever more. Another time, they’re quite pissed off and they tell you to get lost.

I have a lot of images of people contending for the title of ‘Biggest Dickhead in Dalston’. I have none of the ravaged young women who are not at all partial to sock-less-ness. 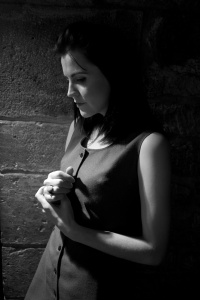 Liv Monaghan is a singer, designer and writer, based in Paris. Part cat, part bird. More musings can be found at www.livmonaghanmusic.com and www.livmonaghan.com

“The charm of horror only tempts the strong.”