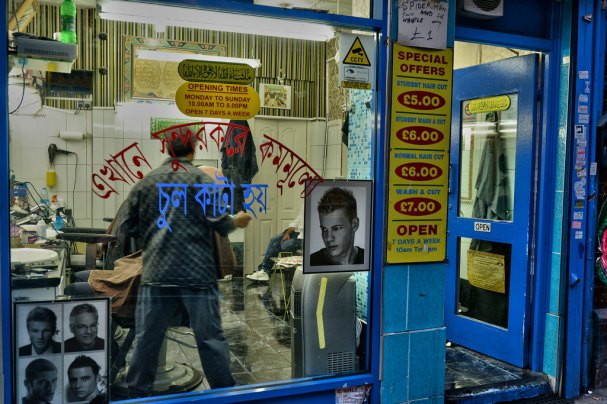 Friday, 9 o’clock, Jummah, Mile End Station. In pendulum style, Imran crosses the dotted borders of Mile End to West Ham on the regular to get to his shop. The morning sea of serious faces wash over him, as he skids across the tiled floor in a rush to get to the platform. He gets stuck behind a large shouting Somalian lady, who shoots bullets of spit down a flip phone, the line cuts out and she stops in her tracks, to then hold it frantically above her head in search for bars. A long domino line of commuters stack up behind him. Her guttural squarks can be heard from a mile off, his fillings start to tingle in frustration. He tries to side step her trailing black burka before spotting a mirage, a small gap between her and the wall and he begins to calculate the chances of pulling through and making it out in one piece. The thoughts of doing a runner flashed through his mind but his knees are not cut out for it anymore. He has tried everything to conceal the bald patches, the belly and grey splashes on his beard, but the boys still call him Pops. Pops you’re getting fat, you’re so slow, come on old man put some muscle into it, la di da. He will never know the moment he turned from a young man to Pops. Life seems to bash and clang around him, before he knows it he’ll be buried deep inside the cold ground. He is getting too old for this young city.

Harassed, he longs for his bed inside his box home. When Saima and him moved in, he had joked that the new place was so small that you could barely yawn without touching the walls on either side. She didn’t see the funny side her nose met her brows. He always sensed her disappointed in him, as if he told her they were to live in a cardboard box outside on the road. She didn’t marry him for his humour. Students, single mums and loners littered his estate. A bunch of hang abouts, with tick marks on their shoes and untucked school shirts zigzagged on low bikes. No gooders who took refuge on his doorstep in the midday gloom. He takes pleasure in interrupting their irritating rap battles and bare fist boxing matches. He shines with pride in watching their foggy expressions turn startled as he threatens to kick them deep into the ground and turn to dust. They run away from the crazy old man who lives inside a box.

He is caught like a cow in headlights with his arse stuck in the air. The woman swerves sharply before smashing him into the wall. She was wondering what this stupid old man was doing, creeping up on her like this. She hits him with her bag before storming off, leaving him wishing he never left home.

Underneath a ruin of scaffolding stands Joe the Barber. Sajid sellotapes the left window with black gaffer tape, whilst Nazrul watches him with his feet up, playing with a comb and a pair of scissors. He marvels at the outline of the boot print that left a perfect hole through the glass, he couldn’t decide if the cracks look like a map of the underground or the popping veins in Imran’s balding head.

From outside, the wall stencil declares that The hair makes the boy, the beard a man. Sajid shakes his head at this and assumes Imran was going through a midlife crisis, but Nazrul puffs air through his mouth and clicks his fingers brap brap brap. An assortment of floating heads of football players, MC’s and “Grime g’s” (Nazrul’s recommendations) are stuck on the peeling wall, the other half is covered in Google images of brown men donning a new fade. There are three red stools in front of white slab tables, mismatched mirrors and a plastic plant. These small details were Imrans idea of making the joint more appealing. He’s always harping on about how the other joints are out-doing them. They need to move on with the times. A black flat screen hangs low in a tangle of wires connected to an unloved VCR, it balances precariously on a black trolley and next to it is an Aux cable jammed into an IPhone which pops out ballad after ballad.

Nazrul’s legs shoot down from the table when he sees, Imrans floating head through the window coming closer and closer towards the broken glass. A look of red rage fills his face, his moustache begins to quiver and wiggle in all directions. He stares from the window to their sheepish faces, Nazrul dares a wave and Sajid wears a tight smile. It is going to be a long day.

Naseema Khanom was born and brought up in Yorkshire and now has moved to London. She writes poetry, short stories, and has been published on series of fashion magazines online.

“The charm of horror only tempts the strong.”