You know the story. You’re at Winter Wonderland with a great guy, a cool guy. Someone who looks like he belongs with you in pictures. You drink too much mulled wine. The Mousetrap ride spins too much and makes you feel nauseous. You’re cold, you didn’t wear enough layers. Your new boots are muddy. People keep bumping into you, you feel invisible.

He doesn’t even ask you how you are.

You walk around the market, linked arms, obeying all the conventions of a couple that have been together for two years. The thought doesn’t cross his mind to point out something you might like (glass snowflakes, leather notebooks, bunny earmuffs) but then, maybe he just doesn’t know you well enough.

And then, miraculously, he decides to call it a night. He offers to take you home, but he doesn’t need much convincing when you say you’ve been looking forward to a tube ride home by yourself all night. The truth isn’t always sexy.

You catch the Victoria Line by yourself to Oxford Circus. You have a buzz and want to enjoy it with the Christmas lights. Fuck every guy out there that makes you feel more alone. Cold epiphanies as you realise that’s all you’ve ever done.

It’s a Friday night, but it seems deserted. You hear a muffled musical tune and can’t quite grasp what it is. Passing Miss Selfridge, you practically sprint to the sound. It’s spectacular. Love Yourself by Justin Bieber played on steel pans. There are a couple of people around. But they’re irrelevant – for the first time you feel as though you are the only one that matters. A song you thought was overplayed and only for the most shallow, suddenly seems like it could save you. But then, you’ve always loved niche covers of mainstream pop. You swear the pIanists are winking at you. You are in awe of what they can do. Putting a song out there, in a different voice, and with a different arrangement, and it actually being able to touch you, to spark something inside of you that you thought was dead, it was like coming up with an equally unique way of saying I love you, something we haven’t managed to do in thousands of years of history.

“I don’t know what I’m trying to say,” Jenna shook her head.

“Well, that makes two of us,” Noah grinned.

It was their time. No-one else mattered. It was two friends opening up about a world they felt didn’t understand them. They both lay side by side on the grass in Walton Park at 11pm, staring up into a starry sky. They stared into the velvety vastness, loving the feeling that life wasn’t about their tiny troubles. They reveled in feeling irrelevant.

“I wonder what it would be like to be a star… pretty cool I bet…” Noah mused, pointing at the biggest one he could see – he swore it winked at him.

“Hmmm, I’d rather be a cloud. Like if you get sick of one bit of sky, you just move on to the next one – and no-one judges you, like it’s complete freedom.” Jenna pulled her giant red and gold scarf around her and nestled back into her puffy black jacket.

Noah looked at her; really looked. He saw the tears brim in her huge, grey, 17-year old eyes, he watched her run her fingers through her hair, and knew she wasn’t really talking about clouds. He tried to skirt around the subject, but his irritation got the better of him. “Look Jen, he’s leaving to go to Asia, we all know what he’s like when he’s away – all of sudden he starts to show affection? For real, you know this guy isn’t serious”

Jenna sighed at how well he knew her, “I know, that’s why I’m closing the door on that, but you? You need to start practicing what you preach mate.”

He pushed her head away playfully, and put his hands behind his head looking up to the sky, “You’re different to me though. You are timeless Jenna, you have a beauty and personality that no one will ever get tired of.” Jenna stayed quiet and just appreciated what her best friend had to say.

Noah sighed, “Sometimes I think being hurt is the best thing to ever happen to us.”

“You didn’t mean it? You didn’t mean to tell my best friend you liked her arse? You didn’t mean to make me feel like absolute shit.” She typed so quickly and angrily she briefly thought about how the glass on iPhones had to be quite durable, resistant to scratches or resentful tapping. Sapphire crystal glass, if only feelings had a protective barrier made of something equally enduring.

She threw her phone onto her bed, and it hit the small brown teddy bear David had got her. Three years, countless spins in the washing machine and it was still soft. She placed it on the bed carefully, with precision, as though she was scared of it being hurt. The dim light in her dusty pink room made it glow, but her head hurt from looking at her screen. Jenna turned off the light, and switched on the lava lamp her father got the year before he left.

“Did you have a good time at Winter Wonderland?”

“No, it was shit,” she paused, as though remembering something, “and then it wasn’t so bad.”

Noah propped his head on his hand as he leaned towards her, surprised. “Wasn’t so bad? He turned it around and treated you like a person for once?”

“Of course fucking not,” despite herself she let out a laugh.

“Oh, I just thought, maybe it was a Christmas miracle,” he grinned that grin that he would only ever grin with her.

They laughed, their voices bouncing off of each other, complimenting each sound – making it more relevant.

“How’s your Mum?” It was a question asked gently, because it had to be.

Noah woke up from the most restless night he had ever had. He looked around his room and rubbed his eyes, as though getting used to it. 80s records bordered the white ceiling and cream walls. The room was immaculate, his tidy desk with books and notebooks piled up and his pens in his retro pen-holder. The only thing that was messy in the room was his body inside his unmade bed.

He heard shouting and then the door slamming.

“Mum?” No answer. He descended the stairs, not rushing, but with a sense of urgency. Tea towels covered the bannister, which was usually bare.

“Mum?” Noah raised his voice a little louder before he entered the kitchen.

“Yes, oh you’re up Noah, what would you like for breakfast?”

“Mum, I’m 22, I can make my own breakfast, what happened down here?” He asked, watching her sweep up the fragments of her favourite pink and gold china teacup.

“Are you OK?” He touched her arm gingerly.

She looked up, applied a smile like she would make-up, and pushed him gently, but firmly. “This is life, it get’s messy – and that’s when we have to clean it up.”

Noah had a feeling she was talking about more than just dishes. He looked at the smashed china on the floor and had an overwhelming urge to hug his mum.

He didn’t, instead he went upstairs and took a hot shower.

We make a lot of our introspective conclusions about life, the universe, everything, while we’re in the shower. Lukewarm, warm, hot water pelts our skin. And we have the discussion with our bosses that we were supposed to have last week. We tell our best friends how much we love them and how they deserve more; we do not smother them or patronise them. We are there for our families and for the first time they listen when we tell them they’re being self-destructive and hurting everyone by hurting themselves – that’s how much they are loved. We manage to capture, so eloquently, how to tell our antagonist to go and fuck themselves, to tell our lovers that we are trying to be so much more, to tell our past that we are strong and that has nothing to tell us, and we won’t be living in it anymore.

And we soap all our frustrations out into lather. We clean and exfoliate and we soften our skin. It feels warm and smells like apple and mint. Then we step out, dry off, and all the lather slinks down the drain and we forget, again.

“How was your morning?”
“Just woke up and had a shower.”

It was 12:30am, Jenna yawned, plugged her phone into her speakers and played a song Noah had never heard before. She sat next to him on the bench and leaned into his shoulder. The song was soft, acoustic, and made them both feel warmer despite the cold. They each put an arm around each other and for a few moments, things just felt completely okay.

“You know you’re more than that right?”

“More than a shitty person who broke your heart. More than family relationships that pissed you about, and so much bloody more than the past that fucked you up.”

“Sometimes I’m not so sure.”

“I wish you could just see yourself like I see you.”

“Let me put it this way, wherever you go? The people around you are the luckiest.”
Noah walked around the block five times, deliberating whether or not to go in. It was Autumn, again, it was enough to make you wistful, wondering where you were this time last year, when the leaves were this crisp and papery. Noah kicked the leaves aside, sat down on the bench and that same nostalgic sentiment passed through his mind whenever he thought about the rain, or the wind, or the sun – that the seasons came around all too quickly. It was 2pm, Noah sat on the same bench. He ran his hands through his once brown hair that was now speckled with grey.

He looked up at the grey sky, slowly bluing – becoming clearer. He winked back at the sun and let himself miss her. He sighed, smiled, leaned back as though she was with him, and hoped with every fibre of his being, that wherever Jenna was, she was happy.

Zahrah Surooprajally is a Creative Writing student, volunteer and campaigner from South London. She enjoys 80s music, comfortable clothes an 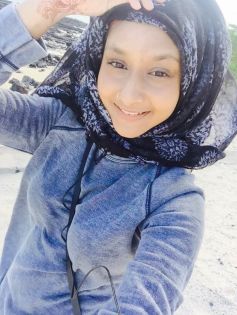 d nostalgia. After studying a BA in Literature and Creative Writing and working in the charity sector for two years, she now dreams of writing a screenplay, becoming a stand up comedian, and creating her own dance flash mob.