Claire climbed the window sill. Outside in the street, Tom was having his first lesson on how to ride a bike. His father, with a hand supporting the seat, was running alongside the bike while Tom happily pedaled forward. Claire pressed her nose on the window and the view became foggy because of her breath. She sighed and turned to her dolls on the bed.

‘Marta, stay under the blanket or you will get cold.’ she tagged the edge of the blanket so the doll’s legs remained underneath.

‘Really?’ the child’s face lit up.

Claire jumped off the bed and rushed to the big walnut wardrobe. She pulled out three hangers. Quickly placing them one after another under her chin, she checked her reflection in the mirror. The yellow one was very old. The red one was nice and had smooth silky fabric but was too bright and she was not in the mood for red today. The blue dress seemed perfect, which also happened to match her eyes. She chose her blue tights and a cardigan. Then she pulled the drawer open and took out two perfect purple gloves. They had googly eyes on them which looked at each other every time Claire put them on.

Half an hour later Claire was waiting in the hall. Now she had her coat and boots on and her hair done in a long thick braid half way hidden under her hat. The googly eyes on her purple gloves staring at each other. The doorbell rang and she immediately opened the door and smiled. A huge brown fluffy teddy bear appeared with its arms open wide as if waiting for a hug. ‘Dad!’ she threw herself in the man’s arms. ‘I’m ready to go.’ The toy was as tall as she was. Claire grabbed it and ran to her room to leave it there, then suddenly ran back.

Her dad and her grandmother exchanged glances.

‘Do not be late,’ her grandmother said.

‘I promise,’ her father answered.

Claire and her father walked out the building, turned right and down the street which led to the river. Claire liked that path; it was a Thames footpath down to Greenwich. Small boats were leaving while foam appeared on the otherwise smooth water surface. Seagulls, gathered on the rotten old dock were turning their heads after the passing boats like a tennis match audience and all in perfect synchrony. Claire and her father shared the footpath with other families, single runners and people with dogs.

He stroked her head. ‘You know I can’t. I travel a lot. Besides, your grandmother won’t be happy.’

Claire knew there was tension between her family and her father. She was too young to understand it and that was why she did not try to. She only knew she loved them all.

‘I want to spend more time with you, that’s all.’

They walked over the bridge, recently built to connect the two shores of Creek Road and then walked down to Greenwich.

‘I thought we could watch a film.’ Her father smiled at her.

The queue in the cinema coiled all the way back to the door. Impatient children waiting to see the last hit released by the Walt Disney studio. Frozen. Claire stayed close to her father rubbing their coats together, his grey wool catching hers. They bought tickets and sat in the bar upstairs for a drink. She had a hot chocolate and he had a coffee. Her drink was hot but she did not hurry drinking it. Now, sitting opposite each other, she could study his face: he was clean shaven with a gentle oval framed by dark hair. He had very soft blue eyes. People always commented how their eyes were the same but she wondered whether her blue eyes were from him or her mother.

He smiled at her. ‘Do you like your drink?’

‘Very much! Thanks Dad.’ Her toes wiggled in her boots, a habit of hers when she was happy.

She took a sip and spilled a little bit of chocolate on her chin. Her dad grabbed a napkin and dried the drip with his big hand. She could feel his coarse skin and smell his musky scent. That moment left a mark on her mind.

He gently pinched her cheek and smiled.

Claire looked out of the window. The bus stop opposite was busy with families gathered around.

It was time for them to take their seats. They headed to the screen room, showed their tickets to a cheery girl at the entrance and searched for their seats. The room was big, the seats were soft and round like armchairs. Claire trusted her coat and gloves to her father and sat next to him inhaling more of his perfume. The lights went off and the film began. She held his hand.

After the film the lights went on and everyone was up on their feet. Her father helped her put on her coat, hat and purple gloves. They could only find one glove, the other one was missing. She looked in her seat. Nothing. ‘Dad, I am missing my glove.’

He looked briefly around. ‘We’ll buy you another one.’ He rushed her outside.

“No, I want this one. It is my glove.’ She was saddened. Her pair of gloves was torn apart. The perfect match was not perfect anymore.

On the way back home they did not talk. There was not much to say. She entered her home and went straight to her room.

‘What happened?’ Claire heard her grandmother asking her father.

‘She lost her glove.’

The door closed and her father’s footsteps faded with distance.

Claire took her one glove off and put it in the drawer next to her carefully folded underwear. A single tear dropped out of her eye and landed on the corner of her mouth. It tasted of salt.

Bistra Nikolova is currently studying Creative Writing at the University of Westminster. Born in Bulgaria, she loves cooking, drawing, walking and dreaming about places and stories she can write about. Sometimes her characters can knock at her door and surprise her. That happened after she finished her mystery novel. 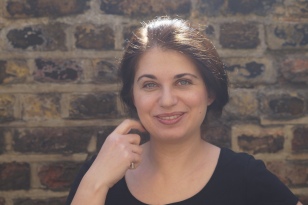