‘Have you seen this?’ Crystal asked, showing me her phone. In the dim alleyway, it was the only light other than our fag ends, and it illuminated my face. She had been able to pull up a news website and – for a moment – I was happy to see she had the money for the phone bill this week.

Teenage Trans Woman Stabbed. It was a large portrait of a young girl with a prominent jaw line and harsh cheekbones. I didn’t need to read past the title of the article before knowing what it was. The event had happened a few days ago, and I had heard of it the day previous. One of my clients had brought it up after we finished.

‘I’ve seen it,’ I said, taking a long drag from my cigarette.

‘It’s just awful!’ Macey interrupted, looking at me. I knew what she was hoping for. Instead, I rolled my eyes.

‘Why would anyone do that?’ she continued, giving a sugary smile.

Seeing that I wasn’t going to respond, Macey silenced herself and lit another fag.

Crystal had taken her phone back and was scrolling through the article. After a few minutes, she stopped. ‘What’s it like? To be trans I mean. We work together every night and I’ve never asked.’

I stared at Crystal. These girls weren’t my friends, but if they were curious I would answer them. I was never one for not wanting to talk about transgender issues. I cleared my throat, a deep cough promptly replaced with the higher voice I learnt at speech therapy. Noticing my fag had gone out, I relit it and shoved my lighter back into the small pocket on my miniskirt.

‘It’s like… being invisible yet hunted. It feels like every single person in London is out to get you. Any one of them can hurt you and get away with it because you are a lesser being than they are. Being trans means being fearful. You’re suspicious of everyone.’

I stopped for a moment. I didn’t mean hurt just emotionally. In my head I heard the lecture I wanted to give, but was too afraid. People are welcome to call me whatever names they like; ‘tranny’, ‘shemale’, ‘himher’, I’ve heard them all and they don’t hurt me. Trans women are more likely to be raped, and more likely to be murdered than anyone else, including trans men. A third of trans people in the UK go through transphobic abuse every year, and eighty percent of the abuse isn’t even recorded. Instead I simply said, ‘Transgender people have an average lifespan of thirty years.’ I heard them gasp.

‘I am invisible because I’m trans. But I am also the stand out because of it. No one wants to look at me. Everyone wants to talk about me. That’s how it is in London,’ I sighed.

‘Excuse me, ladies.’ We turned to see the man who had ventured down our alley and Crystal smiled; Macey leant against the damp wall, and jutted her hips out towards him. I stayed in the shadow of the wall.

‘Hey, what brings you here?’ Crystal purred, running a hand through her hair. From where I was I could see the man’s young face turning crimson and he wrung his hands. He was wearing a suit, very nice, very expensive, and he looked familiar even in the darkness.

‘Ladies, I’m looking for Dahlia. Is she here?’

Instantly I felt uplifted when I heard his voice: Mr Brown was my best client and he adored me. We would meet every month or so when he could get away from his wife. Of course, it wasn’t his real name – but Dahlia wasn’t mine either. The mutual understanding ran deep.

‘I haven’t seen you in a while, Mr Brown,’ I said, pushing my long black hair behind my ear.

‘Wow… I guess she can’t really have an opinion after what she did to you.’

He took my hand and led me from the alleyway. There was a dark car parked next to the curb and he told me to get in. I asked where we would be going, and why we needed a car to get there.

‘You’ll see. It won’t take long to get there. I just prefer somewhere… more comfortable.’

I didn’t believe him, hell, the car would have been sufficient. Giving him a look that showed how suspicious I was, I stepped into the car anyway – I was low on cash and Mr Brown always paid well. Sitting alert in the passenger seat, I took note of the turns we took and where we were.

After a few minutes, he said: “You know, I’ve never asked, Dahlia. Are they real?” The hand he had on the gearstick gestured to my torso.

‘They’re real. Hormones can do amazing things,’ I said.

He stayed silent as we continued to drive through London, passing block after block of flats and shops. It occurred to me at some point that I had lost track of where we were and the route we had taken. Even with the streetlights, London at night looked so different. No longer was there the sea of people moving as one down every pavement; the lights in the buildings had all gone out.

‘Where are we going?’ I asked, trying to mask the waver in my voice.

When he stopped the car, we were outside an empty shop. It had dark newspaper in the windows, taped down but slowly peeling away at the corners of each one. I attempted to peek through the corners, but the glass was too dusty and too murky to see anything through.

‘What is this place? You want to do it in there?’ I was a little disgusted, then I remembered having to do it in the back of the vet’s surgery in front of the animals. Suddenly this place didn’t seem too bad.

As I’d spoken, he had pulled some keys from his pocket and was unlocking the front door. It swung open with a creak and we stepped inside. I wondered whether he could turn some lights on, and he obliged.

Looking around the room, it was exactly what I had expected: a thick layer of grey dust covered the surfaces of the only objects in the room, a table and a sofa. I had my back turned to Mr Brown. I should have turned around sooner.

When I finally turned back to him, the brick in his hand didn’t register to me, nor did the gleam in his eyes. 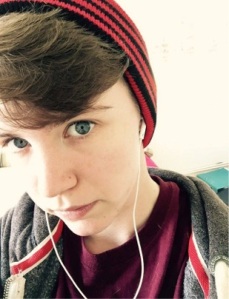 Tyler is an A Level student studying Creative writing and English literature. Tyler’s plans are to study Creative Writing at University and to keep writing.