When things in her world got a little dull, twelve-year-old Malaya would keep calm, close her eyes, and think of London, England. When they got especially taxing, she would actually go there. Depending on where she was standing, it usually wasn’t that far. She was lucky to have, her very own London on a wall at the back of her house.

Malaya travelled in style—via worn-out rattan bench with a lumpy cushion. She would make herself comfortable, put on an invisible seatbelt, tilt her head upwards and get whisked away among the clouds. Then she would roam the London of her Imagination, the perfect little city she had so lovingly put together.

If a true Londoner ever blundered into Malaya’s imagined London, he would be completely baffled. Its creator had never set foot in the British Isles, had never even been outside her little island in the Pacific. This trifling matter did not stop her from putting bits and bobs together from postcards, films, picture books, television shows, and her daydreams. There was the red-tented Piccadilly Circus, populated by a menagerie. The London Eye was simply a bigger version of the ones in her hometown’s fiesta fairs, nailed together with rickety planks of wood. Big Ben had a Littler Ben to keep it company. Downtown boasted Westminster Abbey.

There were precisely three streets in her version of London—Downing Street, Baker Street, and Abbey Road—they winded and looped every which way like a roller coaster or a Seuss illustration. Being a sensible girl, she had thoughtfully installed a system of transportation; black cabs and red buses had a grand time on those loopy roads. There was a Tube like a giant laundry chute and a flying umbrella or two. And the phone boxes! Red and blue, they were planted haphazardly all throughout—on rooftops, in the middle of roads, in castle gardens (there were many along either road).

Part of the fun was not knowing where she would land. Today it was Kensington Gardens, where ladies in pretty hats were having an enthusiastic conversation about Wimbledon over tea and crumpets. She waved at them and they curtsied; she then scampered over a hedge and into Trafalgar Square, where high-cheekboned young Etonians were feeding the pigeons.

‘Your Highness,’ they said in unison.

‘Carry on,’ she said, with a little wink at the tallest, fittest one, then she remembered she was Queen, and quickly put on a dignified air. There were pressing matters at Buckingham Palace to attend to, and so she hopped and skipped past the statues and the enormous fountains with as much queenly dignity as she could muster.

It was hard to stay focused; there were the most fascinating passers-by.

A man in a long scarf hopped out of a blue phone box (that may not have been there five minutes ago) and gawked in surprise at his surroundings. ‘Too early!’ he muttered. ‘An entire century early, and not a single lizard.’

Stephen Fry, Simon Cowell, and Sherlock Holmes were having chips.

A troupe of theatre players was rehearsing. She’d seen posters of an upcoming show at the Globe; this must be it. But the lead seemed to be struggling with his lines. ‘To die, to sleep, to sleep, perchance to . . . to snore—’

‘How would you know? Anyway, this is tedious—can we just skip all this and go straight to the sword fight?’

At last Queen Malaya could see Buckingham Palace right down the block. Her moat, the Thames, greeted her. Men in kilts were patrolling the yards. She made her way across Waterloo Bridge and to the Palace Gates, where her Royal Guards marched up and down. Doing her best to conceal her amusement at their stoic expressions, she entered and plonked herself on her velvet-cushioned throne. She thought of something queenly to say, but just as she was about to say it, a subject flung the door open and demanded, ‘Didn’t I tell you to bring in the laundry an hour ago?’

Imaginary London tipped its hat as it dissolved into the tropical atmosphere, onto a mural on the wall on the back of a house, while its little foreign queen went about her chores with a dreamy smile, soon to return. 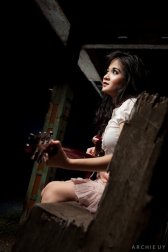 Pami Estalilla is primarily a copy editor—which is to say she fusses over and occasionally grumbles about other people’s books—but dabbles in many other things. This includes bustling about (often clumsily) with her little troupe, the Offbeats, to create stories for the local stage. A native of Cebu, Philippines, she dreams of seeing the rest of the world. Like the character in her story, she has never been to London but has begun negotiations with her fairy godmother.